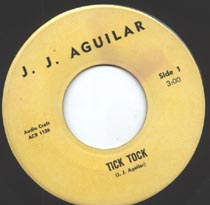 
A favorite obscure find is this self-released 45 by J.J. Aguilar. Who Aguilar is, when the record was made, where it was made are all mysteries. If I was to guess, I'd say Aguilar was a musician, who'd play restaurants and lounges, and found that his song "Tick Tock" was a crowd pleaser. So he recorded it and put it on a 45 as both a demo and something to sell at his appearances. Success didn't come so he moved on to other things. I'd also guess that Los Angeles or thereabouts was his home base and that this was made in the 1970s.


I've listened to "Tick Tock" dozens of times and I think it is brilliant. In a world where truth and justice really ruled the day, "Tick Tock" would have been a big hit. But a solo performer, singing in Spanish, backed by a canned drum track isn't gonna jet someone into the Top 40. Stupid. This has a great melody, a great sound, and great vocals. And the song is superior. It is quality pop. Enjoy. 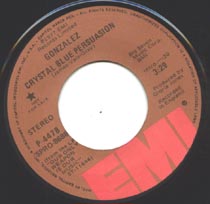 Gonzalez were a mid-70s Brit group, who had some minor hits in the UK but didn't find any success in the US. Nowadays they are mostly remembered for being produced by the soul singer Gloria Jones, who had a hand in this single.

Put Gonzalez, Gloria Jones, and Tommy James together and you get great Latinesque popadelic soul.

I've finally started to catch up on stuff, so time to post something. Figured I'd go for the absurd. Today you get Hierro doing "Mi Sexy Amor," or "You Sexy Thing." Originally, a hit by the band Hot Chocolate, Hierro's version comes off of a compilation of Top 40 hits redone by Spanish language artists on a cheapo sub-label of Gas Records, a LA concern.  I think we are well into the internet age where foreign language versions of American hits is yawnsville. There's gotta be a little something more than a singer vocalizing "amor" instead of "love." What makes Hierro's take worthy of a listen is both the extra-mooginess of the music and his vocal performance. While not quite the acrobat as Allen, Hierro's odd, misplaced groans, squeaks, and hiccups are what make the song. Unfortunately, "Mi Sexy Amor" is the only on this album worthy of posting.