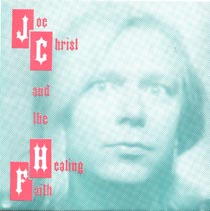 Joe Christ was Joe Linhart of Dallas, Texas, but everyone knew him as Joe Christ. His first band was a punk band named Los Reactors. They put out a few 7"s in the early '80s which are now out of my price range. From there he continued to play in bands until about 1987, though in the 2000s he did get Los Reactors together for a reunion and ran with that for awhile. He also was a film maker such as Amy Strangled a Small Child, Acid is Groovy Kill the Pigs, and Speed Freaks with Guns. One writer describes Christ's films "John Waters times 11."

None of the above is stuff I knew before researching this record. I am not an underground film buff and and do not have an encyclopedic memory for the names of band members. However I did know the name "Joe Christ" as did anyone who flipped through bins of 7" records in the 1990s. And I knew the cover of this record. "Wonderful Life" was in every dollar bin around - you still can find a copy pretty damn easy. I think the date it was released has something to do with it. The late 1980s have gotten a bad rap as far as underground/independent music goes. Certainly there was a lot of crap being released then, but no more so than in the 1990s or today. What there was was a lot of formerly good punk band or former members of good punk bands making shitty records. From hair metal Discharge to Sister Double Happiness, there was a lot of dreck drowning out the good stuff, like this little gem right here.