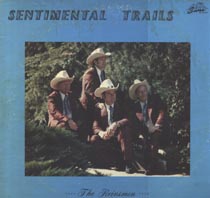 I picked this one up recently in a thrift store in Stockton and when I did I had no idea that it contained the song below. I had no idea the song below existed. Looking at the sleeve, my only thought was "Hmmmmm a country record. It is signed by one of the band members. Maybe it will pay for gas." Then I walked to the counter with a few other records and plopped down my four dollars and change and head to another store. When I got home, I sorted the records into sell and keep piles. I cleaned and started making sound clips of the ones to sell. That is when this hit the turntable. I don't know why but first song I dropped the needle on was "Blue Prairie." At first, nothing hit me, but after thirty seconds or so the meat of the song kicks in and here sneaks a mournful violin. Then the vocals swell. I am mesmerized. This is haunted country, something I've never heard before and something I can't wait to find more of. Certainly, when listening to this Blue Velvet, the song and the film, come to mind. Here is the absurd thing, I like the song "Blue Prairie" so much that I haven't listened to any other song on the record in fear that it won't measure up. There could be five more songs as good, as haunted as "Blue Prairie" but I don't want to take that gamble, not now, not while I am entranced by this song.

At the time the liner notes had been written, the Reinsmen had been around for two decades. During the 1960s and 70s, they played rodeos, county fairs, western art shows, campfire gathering, and the like. They shared the stage with Eddie Dean, Merle Travis, and other country acts. What the notes don't mention is that they are in the Western Music Hall of Fame and considered a classic group.  In his 80s, lead singer and fiddle player, Doc Denning is still musically active...in the Reinsmen and other places.