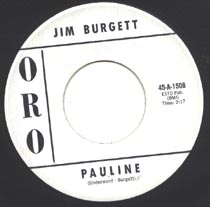 Yeah, EVERYONE has pretty well used the backing vocals between sung verses. But still, a good upbeat lil' Rocker. Thanx!
Interested in hearing some of his other singles like:
"The Living Dead", "Split Personality" (also known as "Jekyll & Hyde"), & "Scene Of The Crime." All early 60's.
Enjoyed your Blog for awhile, and find some interesting & "eclectic" music here. Keep 'em coming, please.

If you were in Northern CA during the late sixties, you probably caught Jim Burgett at several lounge shows at Lake Tahoe. His lead guitarist dressed in Indian garb and remained stone-faced while the band tried to make him laugh. Hilarious stuff at 3 a.m. !!
Corky In Texas