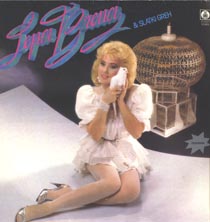 Comments:
Here here! That was a most excellent rant. And the music: weird and unheard are two of my favorite flavors! I'm glad I stopped by today.

I think this genre is referred to as 'turbofolk'. I was in Belgrade years ago and got slapped down for saying I quite liked some of it - a very uncool thing to say.

Well well well... First, greetings from Belgrade,Serbia ! Second, Lepa Brena is not really ''turbofolk'' (although some of her songs are close to it) and to be fair, she had couple of good songs, but ''Voli me, voli'' (Love me you,love me) was not her best LP. She is active today, but she reached the zenith in late 80's. Her music is related to Serbian folk, but be aware that original Serbian music is much better! Thank you, cheers!

Hey, listening to Lepa Brena in the communist neighbour of Yugoslavia called Romania was kind of anti-system disidence!