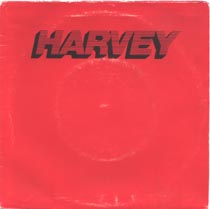 Comments:
Apart from the other issues you bring up, might another problem with Harvey be their name? it's just about as uncool/non-rock 'n' roll as it gets.

Although I find the track not to my taste (I thought it was going to be on par with same-period SVT until the vocal harmonies kicked in) thanks for the link to Black Punk Time. Amazing stuff, great resource.

I have one word for you, Mr Fab: TOTO.

Is that any worse than HARVEY?

"The whole anti-disco 'movement' was tinged with racism..." Just about any popular phenomenon is "tinged with racism," but there were plenty of exceptions, definitive exceptions, in disco to challenge the potency of that remark. Giorgio Moroder? Bee Gees? Saturday Night Fever? Meco? Rod Stewart didn't earn the big P.U. from former fans because he was somehow perceived as race-bending. He was an R&B marvel before he waded into disco, the difference being he was superb at the former, totally sucky at the latter.

Did you read the phrase you quoted? I wrote that the "ANTI-disco" movement was tinged with racism, not that disco was tinged with racism. Disco was, for the most part, not only multi-racial but pretty much the only gay-friendly portion of pop music going at the time. However, as stated much of the reaction to disco was racist and anti-gay.

Wow - cool to see Harvey get discussed. Regi Harvey lived upstairs from Skip's Tavern on Cortland Ave and hosted a weekly open jam session night there for a long time. I think he had a hand in a lot of the music going on there. Unfortunately, it was mostly bar band blues jam stuff that I wasn't really into, but I think this is probably the last bar in San Francisco doing this kind of thing. During the Bernal garage sales, Regi would always put out random Fender parts for sale which was sorta cool. Regi died of cancer in 2010.