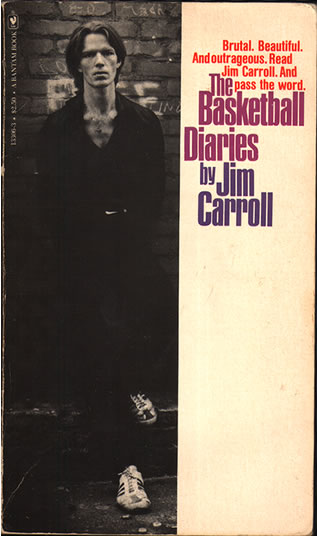 Lots of famous people have died this year. To me most of them are just names, pictures in the paper or on the screen, people with whom I have no personal connection and who had no real impact on my life. In the world of celebrity, Jim Carroll wasn't one. He was a poet, a writer, and a singer but his fame was minor. More Americans can identify the "Informercial King" Billy Mays in a couple seconds than know who Carroll was. Bring up his most famous song "People Who Died" or the movie adaptation of The Basketball Diaries and you will have to drop is name before people think "Oh yeah." For me, Jim Carroll was more than a footnote. He actually had a pretty big influence on my life.

I first heard of Jim Carroll via KDVS, the local college radio station. Like many stations playing underground and punk music, they had "People who Died" in heavy rotation. Though the song might be a bit overplayed now, back then it was super cool. I rushed out to the nearest Tower Records and stole me a copy. Though by the time Catholic Boy was released, I was pretty much a cropped top, combat boots & chains wearin', hardcore punk, there was enough toughness and romance to Carroll's voice to make me a fan. And the lyrics were a bit more than lyrics. Of course, they were. They were poetry set to music, not that I knew that then. To me they just seemed a bit deeper than "I've heard it before/I just want to shut you up" (no dismisal of that classic Black Flag line). And the music was good. Edgy enough to excite me, but a bit cooler to put on when trying to put the make on my punk friends' sisters.

Shortly after the release of Catholic Boy, Bantam Book put out a pocket sized paperback edition of Carroll's memoirs The Basketball Diaries, which was previously only available as a small press edition, which even then was fetching collector's prices. I got my cheapie and read it in a week...and then reread it and reread it until the cover fell off. Though I had already made my way through the books that teenagers and those in their early twenties gravitate to (On the Road, Fear & Loathing in Las Vegas, Naked Lunch [didn't understand a fucking thing!], etc.), Carroll's book hit me. I was a confused fucked up kid. Carroll was writing about a confused fucked up kid, but it was more than that. Carroll had a deceptively simple writing style, one that not only turned me on to his work, but made me think, "I can do that." I filled up volumes of notebooks with the adventures of my friends and I, tales of punk shows we went to, lists of the slang we used, things like that. Where those journals are now, I have no idea. They probably got lost in a move or thrown out by a shitty girlfriend. I have no idea. But those things started me writing and they were inspired by The Basketball Diaries.

A few years later, he came to the West Coast to promote The Book of Nods. I went down to San Francisco to see him read, and went back down there every time he passed through. None of his other books, hit me like the Diaries and none of his records are nearly as good as Catholic Boy but those two things made enough of an impact on me that I've followed what he's done since.

I listened to Catholic Boy tonight, after I read that Jim Carroll died. It is just as good of a record as it was when it was released. To pick out a favorite song or the best tune is impossible for me to do. I'll leave you with a couple and encourage you to track down the record, if you don't have it already.

Thanks Jim Carroll for turning me on to some great shit.