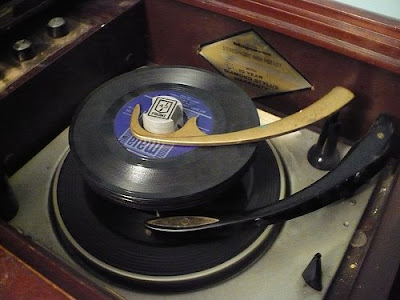 Wayne Barnhill & the Rhythm Aces Sing the Blues to Daddy 45 (Illini)
Great rockin' country song that sounds like it was mixed to be heard on a transistor radio or out of a dashboard speaker. Probably made in the late 60s. The flip isn't any good and my copy skips midway through. No matter: the plug side is the winner.

Billy Budd Sweet Lorraine b/w Boom Diddy Boom 45 (Page One)
The plug is Kinks/BeeGees whimsey filtered through bubblegum. Take away the strong backbeat and B. Budd could take this to the theater. "Boom Diddy Boom" sounds like a Neil Diamond rocker or the Tijuana Brass doing bubblegum. The vocal are more teen idol/actor singer than singer singer.

The Ides of March Vehicle b/w Lead Me Home, Gently 45 (Warner Bros.)
An oldies radio staple BUT if you haven't heard it, imagine the sound of White dudes with afros, hairy chests partially covered by buckskin vests, tight pants, and big dark shades. "Vehicle" is Isaac Hayes-style rock funk, stuff that neither rocks out or is that funky but has the kind of sound that makes you think you've heard the song in a Tarantino film. It is pure cheese, but I listen to this thing about once a month. It could be AM radio childhood memories that makes me do it. The flip is a B side for a reason: A sappy, piano lead howler.

The Perfect Stone Little Girl Purple b/w Lovin You Comes So Easy 45 (Certron)
Oh my. You'd think that "Little Girl Purple" would be a cool psych jam or at least bubble-psych. Instead it is like the Fifth Dimension pretending to be Jefferson Airplane. The flip is the flip.

The Lewis & Clark Expedition The Ballad of Bevo 45 (Bevo)
Damn great obscurity: A banjo tune about the stealing of University of Texas Longhorns mascot Bevo. And that is about it. Future Crud candidate.

Andy Kim So Good Together b/w I Got to Know 45 (Steed)
As far as Andy Kim A sides, "So Good..." is pretty weak. No drive, lame hook. I can understand why "I Got to Know" is the flip - the instrumentation is a bit odd for a potential hit - but it is a great song with a good hook.

The Will-O-Bees It's Not Easy b/w Looking Glass 45 (Date)
Another record in which the B side rules over the flip. "Looking Glass" is psych pop with Jefferson Airplane style vocals and some very nice drum riffs. "It's Not Easy" is boring 60s pop.

Bennie Hess Trucker's Blues b/w Tonight & Every Night 45 (Musicode)
An "Orange Blosom Special" country yodeller with slide guitar, so goes "Trucker's Blues." The flip is a slow one with eerie backing vocals and a haunting slide, but what makes it is the vocals, which sound near demented. To be Crudded.