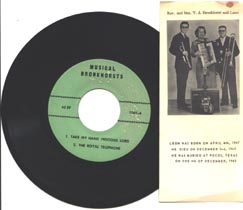 A current favorite at Crud Crud HQ is this here 7" ep by the Musical Bronkhorsts. Other than the name of the group and the song titles, this record would be a total mystery if not for a bookmark sized card that came with it. On the card is a photograph of the Rev. and Mrs. T.J. Bronkhorst and Leon. There are three people in the photo - two men and one woman. One man holds a trumpet, the other a trombone. Mrs. Bronkhorst has an accordion strapped to her body. In front of the Mrs. is a guitar and an amp. Below the photo is a blub that reads "Leon was born on April 4th, 1947. He died on December 2nd, 1965. He was buried in Pecos, Texas on the 4th of December, 1965." Who Leon is I have no idea. But the Bronkhorsts have two address stamps on the back of the card. One is a street address in Long Beach, California. The other is a PO Box in Zambia. Ah, so the Rev. and the Mrs. were singing missionaries. A search, shows that as of 2004 they were still in Africa and active. This from a ministry's web site:


A great joy was seeing again our dear faithful friends Dr. and Mrs. T. J. Bronkhorst. He is 88 years old and she is 84 years old and yet they are still going strong in their calling as missionaries to Africa.
They keep so busy that they cannot get old.  However, a couple of months ago he was mugged and hit on the head, knocking him to the street. It left him dizzy having difficulty walking. We went to visit him. At the dinner table we prayed and laid hands on him and he was immediately healed.
The next day he drove his wife 3 hours to our meeting. He testified and sounded like a young man. We had prayed for his voice as well and it was very strong now. He took us for lunch and then, drove 3 hours to his home. I called him that evening and he said he was feeling wonderful.
Since then, I received a letter saying that he is completing healed and that God has given him a new lease on life to continue to preach the Gospel! Praise God!
After 2004, their internet history goes dead. Perhaps their bodies followed. I don't know. But if they are gone, they left behind a nice gospel record. While the Rev. and Leon are pictured with horns, unfortunately there are no horns on the record. There's vocals, guitar, and a very queasy accordion (sound like an organ, I am sure it is a squeeze box). Because Mrs. Bronkhorst has an accent and the couple spent time in Zambia, I am going to guess that she is South African. (I assume that the Rev. is from the States. And Leon from Texas.) The recording has an otherworldly feel to and, like a lot of my favorite finds nowadays, it sounds like it was made in a far off time. Rather than torture you with one or two cuts, I am going to post all of the songs. It is doubtful that any amount of searching for this disk will turn one up. Like the miracle healing that happened to the Rev. Bronkhorst, God's just gonna have to lay one on you.
# posted by Scott Soriano : 18:13