Happy Summer! Hit 105 here in sunny Sacramento today. Needless to say, the brain is a bit too fried to rattle on much. But I don't need to because someone else has scripted a whole bunch on the Shake Spears. As they should, these lads were one of the biggest bands to ever come out of Rhodesia, a former British colony in southern Africa turned into a quasi-apartheid state until nationalist struggles kicked out White rule and turned the land into the countries of Zambia and Zimbabwe. While the Spears spent their early years in Rhodesia, they made their mark while living in Belgium. Thus, their records, while sought out, are not too difficult to find.

So for this first day of Summer I give you a Rhodesian beat version of the classic Summertime.

The audio documentarian Tony Schwartz died on Saturday. He was 85. Schwartz was a pioneer of urban field recording and had much of his work published on Folkways Records. A little more than a year ago I wrote on his great record of recordings from New York's Hells Kitchen. Take a listen. And while you are jumping around, please please please visit the obit on WFMU's site. Some great stuff there.

While Canadian rockabilly is by no means impossible to create or even rare, you don't hear many rockers from the Great White North, let alone the Great French North of Quebec. Even more obscure is the band who met as teen wards of a school for the handicapped. The Beau-Marks are all of the above. In 1958, polio survivors Ray Hutchinson and Mike Robitaille met at a Montreal school for the handicapped, formed The Del-Tones, paid for and recorded their own stuff, released a single, and had a minor hit. In 1959, they were forced to change their name by another Del-Tones, recorded this single, which got picked up by Shad and charted in the US at #45. That meager amount of success lead to international touring and an appearance on American Bandstand. However, after "Clap Your Hands", the hits stopped. And though they still recorded and could draw moderate crowds in Canada, in 1965, apparent that they had been passed up by surf, American garage, and the British Invasion, The Beau-Marks put it to rest.

I am not quite sure when I first heard the song "Summertime" but I do remember that the first version that lead to my obsession with the song. That was the one Nina Simone did on the At Town Hall album (which I will get to posting up here some time in the next three months). Since hearing Simone's take, I've made it a point to pick up every version that I come across. Since this is one of George Gershwin's most covered songs, there are hundreds if not thousands of "Summertimes" out there. Yeah yeah I do pass up some versions. Since I very much doubt that either Celine Dion or Cher did anything interesting with it and that their yowling isn't gonna top an Ella Fitzgerald or a Sarah Vaughn, I don't waste my time. But even without the Vegas moderne schlock, I've got probably a hundred different takes of the song. I could easily fill the summer up with "Summertime" but, as great as the song is, that would be tedious. So what I am gonna do is drop a dozen or so on you, ones that are extra special, have something unusual going on or are just plain good.

Our first venture into "Summertime" is by the very underrated Ricky Nelson. Though extremely popular from the late 50s to mid 60s, Nelson had the misfortune of lurking in the historical shadow of Elvis, as well as being written off as some bubblegum, teen teevee star. And all that is true, but he also made some great records. I am very partial to his early '60s singles on Imperial. Many of them have a nice tuff sound, propelled by a strong band. Ricky's voice was never totally polished and the rough edges really lend themselves to his rawer works. Don't believe me? Track down his version of "Milk Cow Blues." Its a b-side of some poppier number and it is great. Or just click the link below and hear his rockin' version of "Summertime." The bass and drums roll in like something off a "Back from the Grave" comp. Ricky's vox are flat and restrained but that is fine. Most singers get all wacky with the song, so flat is fine. Great echo on the harmonica. Just a fine fine rock & roll version of Gershwin's baby and a stellar Ricky Nelson performance.

This version is appeared on the b-side of the "Young World" 45. 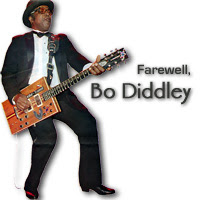 What can one say? Bo Diddley is a legend, one of the founding fathers of rock & roll. While he goes to the grave, his sound, his beat, and his music are immortal. RIP The Originator.

Another mystery single here but damn if it isn't infectious. Eddie Walker's "Game of Hearts" starts of with a cool funky beat. The vocals come in and - yag!- they are some odd combo of lounge, Broadway, jazz, and talent show styles. Even towards the end, when band puts the funkiness into overdrive, the vocals are showbiz in their wildness. The more I listen to this songs - and I've listened to it a lot - the more I am puzzled and the more I like it. The flip side is a near lounge ballad, nothing remarkable enough to post.